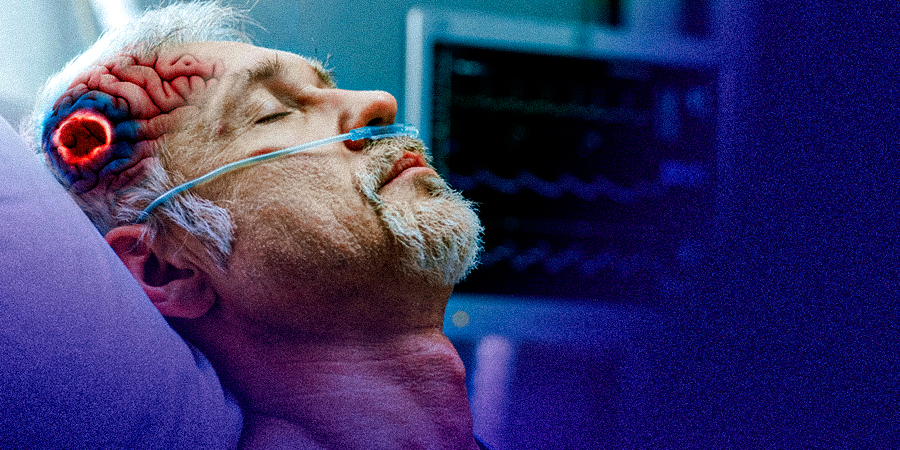 Tom Phelan had just finished biking for the day and texted his girlfriend that he was heading back home. His next memory is being transferred from Miami Valley Hospital to a rehab center near Cincinnati, so that he could learn how to speak again.

A bystander had found Tom lying unconscious on a bike path, about 10 feet from his bike. After being rushed to the hospital as a “John Doe,” it was soon determined that Tom had suffered from a massive hemorrhagic stroke, caused by an unusually shaped brain aneurysm that had ruptured.

After surgery to drain the buildup of fluid on his brain, repair the aneurysm and remove excess blood, Tom remained unconscious for weeks. Slowly but surely, he regained consciousness, and about a month after being sent to rehab, he was able to return home under the care of his sisters.

Tom experienced a spontaneous intracerebral hemorrhage a serious neurological event in which only 20% of patients are expected to survive with full function six months post-injury. These brain bleeds can cause increased intracranial pressure, which in turn damages the brain parenchyma and may even cause herniation. Rapid diagnosis and intervention are crucial in preventing permanent neurologic deficits and death.

Of the nearly 800,000 stroke cases in the U.S. each year, roughly 10%, or 80,000 are hemorrhagic strokes, according to the American Heart Association, which have a higher mortality rate than other types of stroke.

In cases of spontaneous intracerebral hemorrhage, studies have found that the two important predictors of hospital admission for early neurological deterioration are the hematoma volume and the presence of intraventricular hemorrhage, which is present in approximately 45% of intracerebral hemorrhage patients. When blood is in the brain ventricles, it can interrupt the normal cerebrospinal fluid flow and cause noncommunicating hydrocephalus and increased intracranial pressure.

Spontaneous intracerebral hemorrhage patients have a 30-day mortality rate ranging from 35% to 52%.  Yet survivors also remain at risk.

Another type of hemorrhagic stroke is a subarachnoid hemorrhage (SAH), which occurs in the space between the arachnoid membrane and the pia mater. It’s estimated that only 3% of all strokes are due to SAH. However SAHs are associated that higher morbidity rates than other types of stroke.

A 2018 Stroke study of 19,765 patients who had been diagnosed with a subarachnoid hemorrhage between 2004 and 2015 found that the overall in-hospital mortality rate was 21.5%. It was also noted that the hospital admission rate for patients with SAH increased with age, with the highest rate being 17.5 per 100,000 person-years in patients over the age of 80.

Epidural hematomas, on the other hand, while not a stroke, can cause damage to brain function and even death if left untreated. EDHs are most commonly the result of a severe head injury, such as a motorcycle or snowboarding accident. Caused by an accumulation of blood between the skull and dura mater when a skull fracture tears an underlying blood vessel, they are more likely to occur in young adults and are four times more likely to occur in males than in females, according to UCLA Health.

However, even after an epidural hematoma is treated, there is still the possibility of permanent brain damage. Seizures could last for several months post-EDH, or they may not occur at all until up to two years after the initial injury.

While most adults recover within the first six months, if brain damage has occurred, permanent complications can include brain herniation, leading to a permanent coma, normal pressure hydrocephalus, or paralysis and loss of sensation.

Subdural hematomas (SDH), bleeding in the space between the dura mater and the arachnoid membrane, can occur either as a result of a trauma or spontaneously. Subdural hematomas are usually caused by a tear in a vein, leading to a leakage of blood.

While they occur in 25% of people with head injuries, according to Cleveland Clinic, they can also be the result of the use of blood thinners such as warfarin or aspirin, cerebrospinal fluid leakage, or natural brain atrophy from aging, which can cause the subdural space to get bigger and makes blood vessels more likely to break.

Subacute subdural hematomas usually produce symptoms that present in as little as few hours or as much as a few weeks after the initial head injury, and often occur as the result of a concussion.

A 2017 Journal of Neurosurgery study found that only 24% of the 68 patients 80 years or older with isolated aSDH had a favorable outcome after discharge, and only 10% were considered to have an “excellent” recovery.