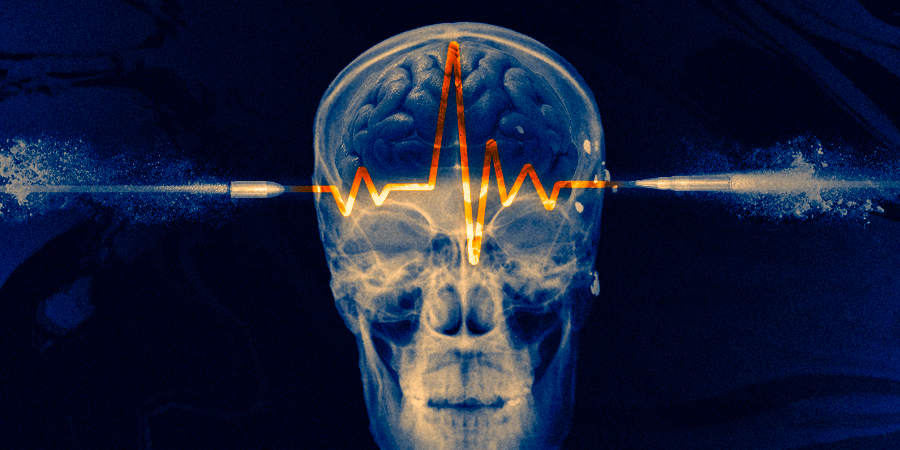 Three-year-old Stephanie Ayula was overjoyed to be carrying a bouquet of white flowers as she walked down the aisle at her aunt’s wedding. But that joy turned into fear as she and her grandparents were shot on their way to church the following day.

The bullet tore across Stephanie’s head, ripping away parts of her forehead and scalp, damaging her right eye and exposing her hemorrhaging brain. She underwent life-saving surgery that returned to her normal neurological function.

But complications from the shooting have continued to impact Stephanie’s quality of life even years later. She has been homeschooled for most of her life because her frequent surgeries impacted her ability to attend regular school consistently.

Penetrating brain injuries (PBI), most of which are gunshot wounds to the head (GSWH), account for only 1.5% of traumatic brain injury (TBI) incidents, but they are the most lethal, accounting for 42% of all TBI deaths.

What’s more, the American Association of Neurological Surgeons reports that trauma resulting from gunshot head wounds are thought to be fatal 90% of the time, and most victims do not make it to the hospital at all. Once admitted, less than half of civilian gunshot head wound patients who arrive alive to the emergency department end up surviving their injuries.

But are there certain factors that can lead to a worse outcome for gunshot head wound patients?

In a 2018 study published by the Journal of Neurotrauma that examined 8,184 adult GSWH patients from the National Sample Program of the National Trauma Data Bank between 2003-2012, researchers found that 45.5% of patients were between the ages of 18 and 29. However, patients in this age group also had the highest incidences of hospital discharge. In this study, 66% of patients 18 to 29 years old returned to home following their GSWH, compared to 30% for those 60 and over.

Among patients between the ages of 18 and 49, assault was the most common means of GSWH at 57.3%, and interpersonal violence had greater incidences in those under the age of 40 (62%). In contrast, those over the age of 40 had higher rates of suicide and self-inflicted injuries (65%) than those younger.

A 2021 NCBI study titled “Penetrating Head Trauma” reported that most TBI deaths are due to firearm injuries, and around 20,000 GSWH occur annually in the U.S. But injury and mortality rates can vary significantly based on the type of firearm used in the incident.

In the 2018 Journal of Neurotrauma study, handguns were the most frequently used firearm type, accounting for 50% of all injuries. Handguns also led to the highest mortality rates (58.7%), with hunting rifles a close second at 48.7%.

Rifles were found to be the most lethal weapons of all, and patients of this type of injury are more likely to die before arriving to emergency rooms.

In the U.S., the most firearm-related TBIs were found to occur in the South (39.5%), according to 2018 data. However, the Midwest had slightly higher incidences of suicides and self-inflicted injuries than the South, at 47.8% vs. 45.1%.

With regards to handgun injuries, the Northeast ranked the highest in the U.S. at 74.2% and was the second highest for patients admitted to Level I trauma centers (64.7%), with the first being the Midwest (68.1%).

Patients in the South were found to have a longer hospital length of stay compared to the Midwest, with an average increase of 3.7 days, as well as higher odds of complication.

However, mortality rates only varied slightly by region, ranging from the highest at 58.8% in the Northeast, to the lowest at 53% in the West.

The method of injury has also been found to have an effect on outcome rates as well. According to 2018 data, the highest incident of gunshot head wounds was related to assault (49.2%), followed by suicide/self-inflicted (41.9%).

For assaultive gunshot wounds to the head, there was a mortality rate of 41%. However, this increases to 74% if the wound is an isolated head wound compared to 52% for non-isolated.

Researchers believe that this can be attributed to the fact that isolated head wounds, which are often a result of suicide/self-inflicted injury, are performed at close-range in comparison to non-isolated head wounds that typically involve being shot multiple times from a farther distance. Furthermore, a Glasgow Coma Scale score of 3 to 8 was found to be associated with the highest risk of death as well as prolonged ICU length of stay.

According to a survey from the National Institutes of Health, around 1.9 million people suffer from an intracranial injury annually in the U.S., 20,000 of which result from gunshot wounds to the head. Gunshot head wounds also come with a high financial burden. The cost of treatment is estimated to be $117,338 per individual, and around $1.1 billion annually.